Educational opportunity and marketing effort all in one

HOT SPRINGS, Ark. – “One of the things that really made it worthwhile is that one of the kids, Michael, came up to me and said, ‘This is fantastic and I will remember this forever.’ That just gave me a good, warm-and-fuzzy feeling,” said Ron Harrison, head of American Lidar, a one-man laser scanning service provider operation based here in Hot Springs. 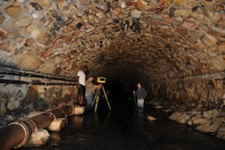 He’s referring to a project he’s recently completed with the local high school’s EAST (Environmental and Spatial Technologies) program, whereby these high school students scanned and modeled an underground tunnel for the purposes of helping with a city engineering problem involving flash flooding in the downtown area.

“The city is fixing to breach the tunnel and get some equipment down there and clean it out and channelize it so they can improve the drainage,” Harrison said, “so the kids came up with the idea of scanning the tunnel and then printing it out on the 3D printer they recently built.”

They did four scans in two setups with American Lidar’s Optech terrestrial scanner and were able to acquire the length of the tunnel going out 1,500 feet in either direction

The University of Arkansas-Fayetteville got involved, too, providing some modeling expertise, and after about a month the students are preparing this week to present their model and data to the city’s engineering department.

“They’re quick studies, too,” Harrison said. “It really amazed me. The MeshLab software even I had a problem with, but they weren’t intimidated at all.”

And, sure, it’s nice to contribute to the education of our country’s future engineers and surveyors, but Harrison wouldn’t be upset, either, if the city’s engineering department was pleasantly surprised by the quality of the data they’re presented with, originating as it did with American Lidar’s scanner.

They were able to quickly determine the tunnel’s slope and potential water velocities, extract cross sections, and do volume calculations, all data points that could both prove useful and would otherwise require a number of discrete measurements using traditional survey methods.

These are the benefits Harrison, a survey tech. by profession with a long career already behind him with the U.S. Army Corps of Engineers, saw when he was first introduced to point cloud data more than a decade ago. “That was in the underwater realm,” he said, “and I said to myself that if this ever makes landfall, I’m buying in.” After a number of twists and turns, that finally happened two years ago, and now he finds himself evangelizing as much as marketing his services.

Those dual purposes seem to have come together perfectly at Hot Springs High School. “It’s really hard to get the kids interested in engineering and surveying these days,” Harrison said. “They don’t’ have a good idea of how fun it actually is. And we did have a blast scanning that tunnel.”

How Can 3D Scanning Help?